Kiss Me In The Car

It was just plain fun to counsel this beautiful and bright young woman.  I loved her mind, her imagination, her seriousness and her wonderings. My claim of enjoyment might seem a bit strange when I add that her very first words to me were, “I am utterly depressed.” She claimed to struggle constantly with “going from happy to sad,” “hitting rock bottom,” and “going glum.”  I am one of those modern day counselors who thinks cognitive and behavioral principles (a thinking and doing focus) are enormously useful in building hopeful interventions for my clients. That was where Anna (not her real name) and I began that first day.  Well, I guess I ought to say that we began with the thinking part of that plan– the doing portion would come later.

Early on we talked a great deal about cognitive distortions (also called styles of “twisted thinking,” including all-or-nothing thinking, minimizing, catastrophizing, mind reading, and fortune telling), and we practiced searching out those lies in her thinking so that she could either revise them or toss them out.   Anna quickly amazed me with her ability to recognize and fix her own faulty thinking.  “Now that’s not quite right, is it?” she would say to me as she shared her way of looking at the struggles she faced every day as a young wife and mother.  She got good at the revising and tossing part, too, often doing it right out loud in the middle of our conversations.  She impressed me.  Twisted thoughts can be “energy vampires,” and so doing away with them and replacing them with truth helps build a store of energy to put into the things that matter. I liked watching Anna find this out for herself.

Anna’s husband came to be the unseen guest at many of our sessions. She described him as a fine young man—a good husband and a good father. I welcomed this unseen guest into our sessions in every way I could, as I knew he was important to her healing.  Anna said once, “I know it affects my husband when I am sad, and this breaks my heart.” I looked for ways I could include him in our work together. It was a story she would eventually tell about their courtship that sparked my doing idea.

During one of our last sessions together, it occurred to me that I had worked hard from the very start of our relationship to fully embrace Anna’s intense and analytical thinking, and that I often found it necessary to ask her to repeat or clarify something so that I could better understand her. One day I shared with Anna, “My only job is to listen to you.  I am a trained listener, and yet still I miss you sometime.  I’m wondering how it is for your husband when you two talk together?” She told me that she would usually begin their conversations by sharing freely and enthusiastically.  This I could easily imagine, as it was similar to my experience of her. But whenever her husband did not, or could not, match her enthusiasm or respond with accurate understanding, her disappointment would often lead to her retreating in silence, leaving much unsaid.  “I get tired of trying to explain how I feel, so I just say ‘I’m done.’” She is left feeling hurt and misunderstood, and her husband is left feeling confused and shut off from his wife. This wasn’t a communication style that would serve the couple very well.

To make matters worse, the couple’s two small children, along with all their many other responsibilities, left little time for uninterrupted talk.  Since we were spending time learning how to build successful and fun communication between the two of them, I asked Anna one day, “Where do your best talks happen?” “In the car,” she said.  It would be on their way places, either alone or with the children secure in their car seats, that they would capture the time to talk deeply and freely about things.  She reminisced with me about the beautiful talks they used to have in the car during their college days, when they would spend a great deal of time there talking and planning and dreaming about their future together. Both of us were excited as we talked about ways that they could mimic this lovely “car talk” more often, only this time with the intention of building upon the good communication principles we had talked about in therapy—most important in her case, of course, would be to persevere past the point of frustration she had described to me earlier. This was the doing part of our thinking and doing plan, and it worked very well for this couple.

Our last session ended with Anna and I laughing together at the words of a country song I recalled:

And get lost on those old dirt roads.

We’d pull off on the side,

And then I’d hold you tight…

Let’s do that tonight.

Seems the only time you kiss me

Is when I’m heading out for my job.

I called you to say,

Baby it ain’t too late,

Come on and kiss me in the car.

I had so much fun encouraging Anna and her husband to sit out in the driveway and do it the right way… from the heart!  Far, far from being too late, I think we were just in time.

(Song lyrics from “Kiss Me in the Car,” by John Berry) 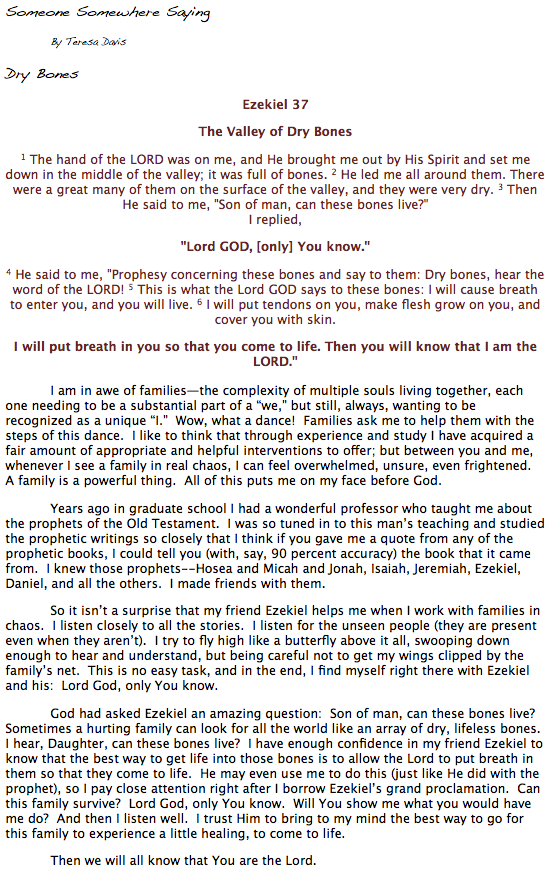 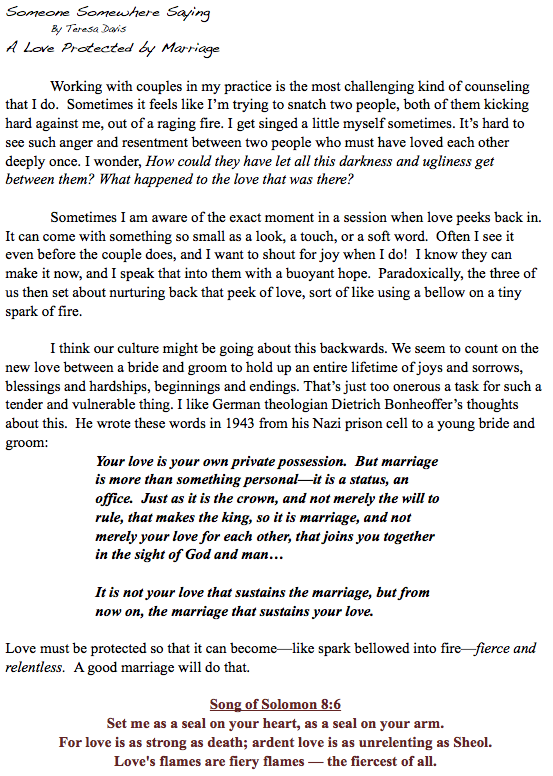 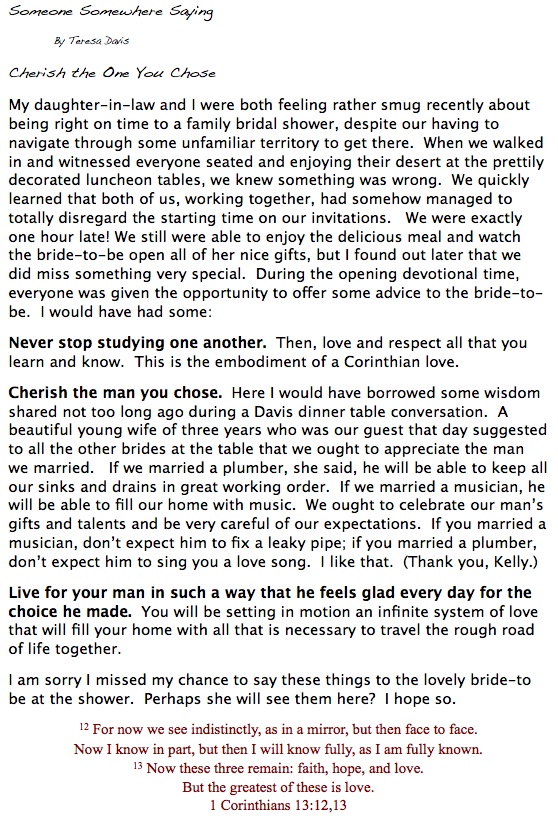 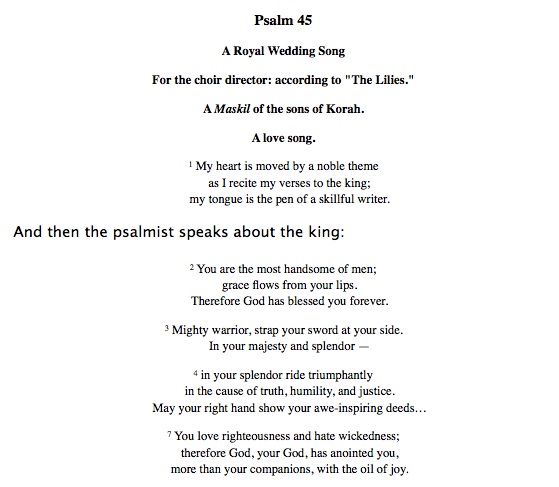 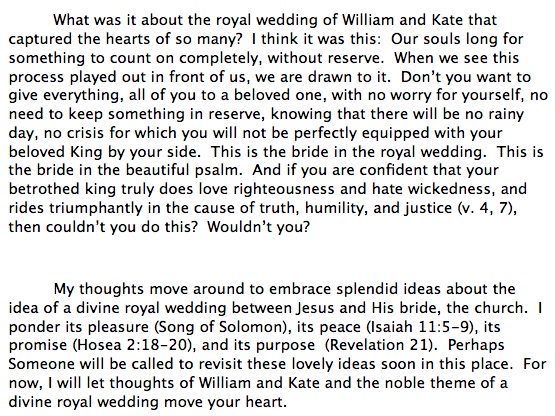 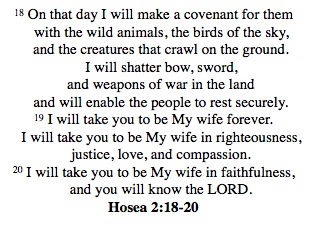 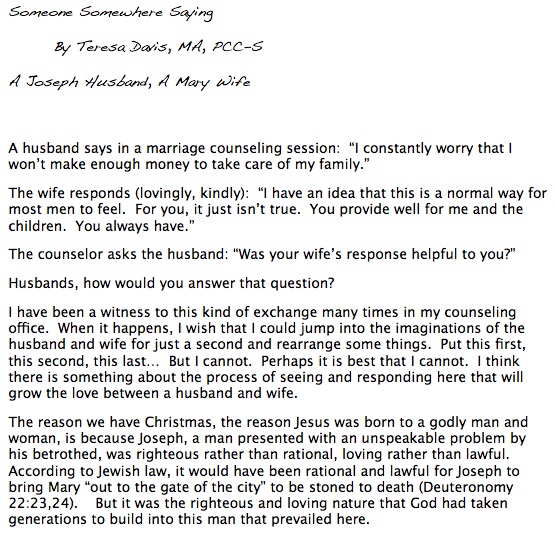 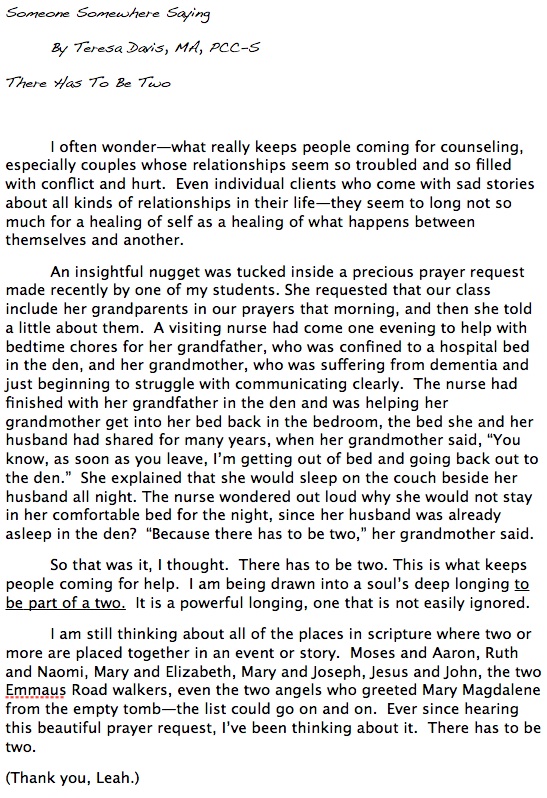